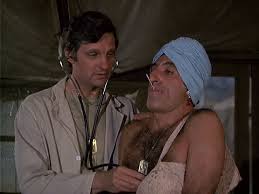 I’ve had a lot of time to think about dying.  I experienced death at the early age of 5 with the loss of my first dog, then at 11 with my dad’s passing.  Then there was my mom’s ten year battle with breast cancer, my husband’s two battles with cancer, my own breast cancer, and heart disease and our daughters fight with an eating disorder.

Sounds like Maxwell Klinger in the TV show MASH.

Klinger: Yes sir. I don’t deserve to be in the Army.

Whether it is the loss of a pet or person I have learned that death is a part of life.

Death has given me opportunity to grow in knowledge, faith and even humor.

My mom and my husband, Thad had a great relationship, truly respecting and loving one another.  That being said, Thad would tease her mercilessly.  Mom would say that when she died she would come back to haunt him by embarrassing him at some inopportune moment.  Several months after her death, Thad was presenting at an important meeting filled with doctors and nurses when he realized his pants were unzipped!  He walked behind the podium where he casually pulled the “barn door” up and closed.  He wasn’t sure how long he had been in that state but felt sure it was Mom who was laughing now.

I have used this story to instruct my loved ones that should they decide to keep me alive beyond what doctors, science and medicine can offer in the way of quality of life, I will return to earth to torment, wreak havoc and generally make them sorry.   As the song says: “You’ve got to know when to hold ‘em (hug me) and know when to fold ’em (let me go)”.  Keeping me alive for one’s sake is selfish, letting me go when God is calling me home is love.

And that brings me to another story.

Thad and I have openly discussed our end times with our daughter.  Being the only child she bears the burden and so we feel preparation is key to helping her make this as smooth as possible.  We talk about what she will need to do, where our documents are, what our wishes are when we become unable to make decisions for ourselves.  She tells us not to worry as she is going to have us stuffed, dressed in butler and maid uniforms, each holding a tray which she and her family will use to hold her purse, book bags, the car keys, etc.  She will place us on either side of the front door.   Don’t I feel special?  I told her to make sure the taxidermist gets all the wrinkles out of my face and neck and a “boob” lift wouldn’t hurt.

Experiencing death in my life has given me the opportunity to grow stronger in my faith and to walk closely with God and in 62 years of living He and I have had some intense and intimate moments.  And I know there is more to come.  From the moment we are born we are making our way towards dying to self, dying on earth and being reborn with the Father.  Yes, death is a part of life and the ultimate in healing.  So while the process of dying is a bit scary, my destination is healing.  And that’s something I can live with.