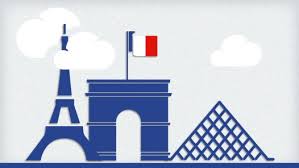 Thad and I recently spent 10 days in France.  We learned about Chateau’s and wine, beautifully architecturally designed buildings, wine, cathedrals, wine, rich culture, wine, history and delicious foods.  Did I mention wine?  We visited the beaches of Normandy, the American cemetery and the War Museum – leaving us with emotions that vacillated between sadness and pride.

Unfortunately, we also experienced some not so pleasant behavior on the part of a restaurant in Paris.

We had arrived at our hotel in Paris and went walking to find a nearby restaurant to eat.  Checking the menus displayed on the windows, we found one that was to our liking.  However, upon entering we were told we needed a reservation and therefore went to another restaurant instead.  On our last night in Paris, we decided to go back to the first restaurant and asked the hotel receptionist to make a reservation.  Surprised by the request, the receptionist said that that particular restaurant did not take reservations.  It should have been our first clue.  Nonetheless, we walked down to the restaurant promptly when they opened and found only a few patrons seated.  We were shown to a table that was “sandwiched” between one other couple and a wall.  It would require the couple to rise from their table to allow the four of us to be seated.  As we are not diminutive in size, we asked if we could sit elsewhere.  The waitress said “No”.  That was our second clue.  When we restated our difficulty, she went to the kitchen, returned and showed us to another table where we sat and waited for about 25 minutes.  Third and final clue.  We finally asked for menus and could we place an order for some wine.  Another ten minutes.  While we waited we watched as delicious tureens of Beef Bourgeon were being served to a now busy restaurant. The aroma was captivating and when the waitress came to take our order for both the wine and the meal we all ordered the Beef Bourgeon.  Ten minutes later, the waitress returns to tell us that there is no more beef bourgeon.  Disappointed, we made other selections.  As we waited another 30 minutes, tureens of beef bourgeon were delivered to tables that appeared to be frequented by local patrons.  As we ate, it dawned on us that we were considered “The Ugly Americans”.  It was tempting to turn ourselves into just what they thought we were.  Anger made us think of things like: getting up and walking out, not leaving a tip, saying something about the poor and obviously purposely rude service came to mind.  In the end, we chose a page out of the bible:

Put on then, as God’s chosen ones, holy and beloved, compassionate hearts, kindness, humility, meekness, and patience, bearing with one another and, if one has a complaint against another, forgiving each other; as the Lord has forgiven you, so you also must forgive. And above all these put on love, which binds everything together in perfect harmony. And let the peace of Christ rule in your hearts, to which indeed you were called in one body. And be thankful.    Colossians 3:12-15

We continued to treat the waitress as we wished to be treated-with respect and kindness, no matter what distorted image she might have of us.

I have to say it left a bad taste as we left Paris. But as we continued on our trip to Bordeaux we found countless examples of kindness by the French inhabitants who live in this beautiful country.  We encountered a young father of two children who helped Thad get our heavy luggage stowed on board the train, a family that helped interpret what was being announced during the train ride, and a lady who helped me carry my luggage up a flight of steps.  All along the way were people who helped direct our paths to where we needed to be, or to understand this lovely romance language.

And as the days passed I realized that it is not so different in America. We often have preconceived notions of people from different countries or even areas within the United States.  As a child I spent many years in Italy and upon my return to America in 1970 (Flower Power – Hippy Era) I found all my peers to be rude, self-centered, wild and disrespectful.  Now, were all my peers rude, self-centered, wild and disrespectful?  Of course not.  As time went by, I made friends who showed me patience, and kindness turning my thoughts and reactions to be unfounded.

Fifty years later, I realize that one incident in a small French restaurant does not make the French terrible.  It reminds me that there are all kinds of people and we are all being shaped by our experiences and our journey.  It is my hope our visit to that little French restaurant in Paris showed them that Americans can indeed be beautiful.

Prayer: May we tread lightly through this world and only leave footprints and fingerprints of God’s love behind.