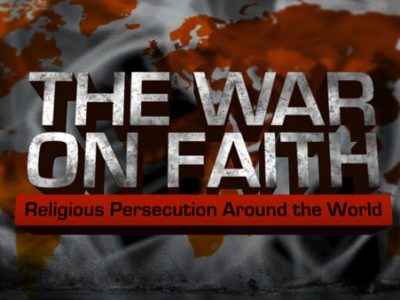 The Persecution of Faith

We are living in a society that is so afraid of being politically incorrect that we are denying our rights rather than allowing our rights to be exercised.  I am talking about the persecution of Christianity and Faith, in general, in this country.  It is slowly and incrementally permeating every area of our lives.

I am the first to agree that we are not living in a country where practicing our faith can end your life, but I do believe that we are slowly accepting societal “norms” of today and thereby relinquishing our right of “freedom of religion”.   Dr. Ben Carson states “Our values and principles are being given away for the sake of political correctness.”  Here are a few examples.

When I was employed at a state college, I was urged to refrain from any conversations with regard to religion & politics. However, when the horrific events of 9/11 occurred, people reached out to one another and interfaith prayer meetings sprung up at the College.  A student approached me and another staff member to be advisors for a new club that students wanted to form: Student Christian Leadership Association.  A Jewish Student Leadership Program was begun as well.  Both Clubs flourished but made the College officials nervous for fear that issues would be raised against them.

Are we abandoning our faith for society’s fear of offending someone or group?  Is religious persecution (of any faith) slithering into our schools, homes, and even churches much as Hitler did in Nazi Germany and in communist nations?  And are we being complacent about it?  If we, the people are not vigilant, we will begin to lose who we are and what we stand for. Have we learned nothing from history?

Can we not accept a world, country, state, city, neighborhood where a Jewish family walks to synagogue on Saturday, a Muslim man will stop five times during the day to pray and a Christian homeowner will place a manger on his lawn to celebrate the birth of Jesus without fear of offending someone?

In the name of acceptance for everyone we are becoming intolerant of every belief: Christian, Judaism, Hinduism, Islamic, Non-Religious.  To be politically correct we are becoming a Godless society.

Is God being pushed out of our lives?  And if so, what are we doing about it?

Martin Niemöller (1892–1984) was a prominent Protestant pastor who emerged as an outspoken public foe of Adolf Hitler and spent the last seven years of Nazi rule in concentration camps.

Niemöller is perhaps best remembered for the quotation:

When the Nazis came for the Communist, I did not speak out –

As I was not a Communist.

When they locked up the Social Democrats, I did not speak out –

As I was not a Social Democrat

When they came for the Trade Unionist, I did not speak out –

As I was not a Trade Unionist.

When they came for the Jews, I did not speak out –

When they came for me – there was no one left to speak out.

Someday, someone may tell me that I cannot pray in a public restaurant asking God to bless those that have prepared this food and that it nourishes my body.  Someday, my pastor will be unable to come to visit me at the hospital because it might offend the person in the bed next to me.  Someday, I won’t be able to pray to God as I place my body on the surgical table, the radiation table, or while I receive the slow poison of chemotherapy that will kill my cancer but may save my life.

That is a someday I hope I never experience.  It is God’s grace and mercy that penetrate my life and makes each day worth living.