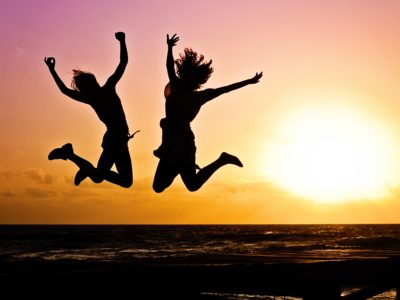 Living in the State of Joy

The average dog has one request to all humankind.  Love me.  – Helen Exley

Tara was the family dog during my childhood.  We lived in Huntington, Long Island in New York.  It was the suburbs and a time when kids and dogs ran freely in the neighborhood.  There was no fear of abduction or leash laws.  Tara was my brother Ricky’s dog.  She would walk Ricky to the bus stop every school morning and be there when the bus dropped him back off.  During school hours, she would rally her dog friends to her yard where they would play with twigs, logs, rocks and occasionally my mother’s freshly cleaned laundry hanging on the line.  My mother used to lament that she did not know why Tara’s friends always had to play in our yard.  It was an idyllic time and place for Tara but that was all about to change.

We were moving to Italy so my parents could launch a business.  Taking a dog overseas required a lot of paperwork, and in addition, we would be living in a small apartment where she would not have the same freedom she was used to.  My mother decided that it was best for her to find a new home.  We kids were devastated.

Tara must have sensed the change in the household for she began haunting my mother day and night.  Literally, she sat beside my mother’s beside at night with her head on the mattress just staring at her while she slept.  My mother found that sleeping with Tara staring at her made her feel so guilty that she went to talk to the veterinarian about the situation.  He explained that Tara was part black Lab and part German Shepherd and as such considered herself very much a part of the family.  He stated that he felt Tara would find it very difficult to adjust to a new family and would have a better chance of adjusting to a new environment.  Mom came home that night and announced that Tara would be getting the much-dreaded shots just like we were in order to travel overseas.  There was a unanimous “Hurrah!”  I think Tara knew she was going to Italy too, because after that night she resumed her sleeping spot at the beginning of the hallway instead of beside my mother’s bed.

Tara was remarkable.  During the first two months in Italy, my parents, who grew up in Italy, took us three kids touring the country.  Tara, or course, came along.  She went on a gondola ride through the waterways of Venice, spent New Year’s Eve on the Isle of Capri and rode through the mountains of Northern Italy.  She adjusted to apartment living and being walked on a leash instead of freely exploring her new neighborhood.  She became my confidant and my ever present friend during the summer months when we lived in an area where there weren’t many children my own age.  I would read Nancy Drew books to her and she always appeared to be listening.  I would dress her up in whatever I happened to think was the rage, and tell her all of my adolescent problems.  She often went to work with my parents and was the guard dog for the business.

After my father passed away, we returned to America where my brother was to attend Fordham University.  He insisted on taking Tara with him, and against my mother’s better judgment, she let him.  Tara became a regular at his classes.  One day during a particularly long and boring lecture, Tara stood up from beside my brother’s chair, loudly yawned and stretched.  The professor stopped in mid-sentence, looked at Tara, and looked at my brother.  My brother thought that he would surely be expelled.  The professor promptly dismissed the class because Tara said it was enough.

When my brother got a job selling cars, Tara learned to stay on the car lot, in his office, or sleep in his car.  When it was hot, she taught herself to use her paw to roll down the windows.  Tara even had a say in my brother’s love life.  Since Tara was always with him, it seemed only appropriate that she would go on his dates.  Tara did not always like the girls he dated and had no problem letting him know her opinion.  My brother was so used to having Tara with him, that he did not always remember to introduce Tara to his dates when they got in the car.  Imagine their surprise as my brother held the passenger door open for them to get in, then closed it and walked around to the driver’s side, only to have this large black Lab rise up and poke her head over the front seat to inspect them.  To Tara, it was not important where she lived.  It only mattered who she lived with.  Tara adapted and adjusted to her surrounding, loving each day wherever it may have been as long as it was with the people she loved the most – her family.