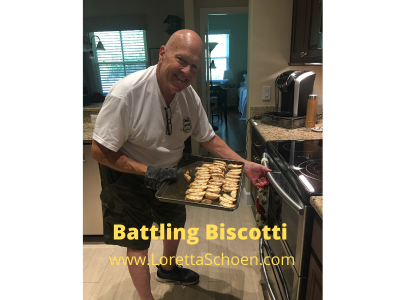 I admit it.  I am absolutely defenseless when it comes to abstaining from biscotti.  Specifically Thad’s biscotti.  He got the recipe from a dear friend who spent an afternoon teaching and sharing the recipe with him and he has been making them ever since.

The problem starts as soon as he begins toasting the almonds.  Have you ever tasted toasted almonds?  If you haven’t you must try them.  You’ll never have the plain Jane almonds again.  Then he begins to make the dough.  As he mixes the ingredients, the aroma begins to fill the kitchen; but its when he fires up the oven that the entire house, including the garage, is filled with the anise oil, and baking aroma that leaves me drooling and charging into the kitchen for a sample.

It’s a laborious process this biscotti making.  You bake the batter, then slice the dough into the biscotti shape, then bake them again, first on one side, and then on the other.  The aroma continues to build with each baking until I am delirious and totally consumed with eating them.  As he cuts the cookies, little bits break off and he puts the bits in a bowl which I have taken on the job of getting rid of them.  By that I mean, I eat them.  I eat them until I am much like Winnie the Pooh sitting under a tree with his belly full of honey.

I am positively disgraceful.  But like a true Biscotti Addict – I really don’t care.  I want those biscotti, I jump up and down with glee when one breaks so I can devour it.  Yes, this addiction to biscotti is bad.

So I argue with him when he gets the yen to bake them because I gain 5 pounds when he does.  One time, a friend and her husband were both recovering from medical issues and Thad set out to make them a batch.  Knowing that I would groan and moan, he decided he would make them over two days when he knew I was busy out of the house.  He roasted the almonds one day and made the dough for the biscotti and hid it in the outside refrigerator.  When I came home for lunch and noticed a roasted almond aroma he said he made salads for our lunch and thought having roasted almonds would be a nice touch.  So impressed that he would go ahead and make lunch, I never thought beyond the gesture.  The next day as soon as I was out the door he quickly got to work making and thrice baking the cookies, then delivering them along with all the crumbs to our friends!  Of course, as soon as I parked the car in the garage, I knew he had made the biscotti  But imagine my surprise when I came into the home to find it filled with all the aroma of biscotti but not one speck of them in the house!  Even the kitchen counters were free from a crumb! Believe me, my addiction is so strong I checked.  I am not beyond licking the crumbs off the kitchen counter, folks!

I kept saying how good it was that he did this but how mean he was not to save me even one!  Or just the crumbs! I truly didn’t know whether to thank him or slug him.  Talk about your mixed emotions.

As I write this, I have sequestered myself in the den, closing the door to reduce the intoxicating smells emanating from the kitchen.  It has helped somewhat, but every time I come out for a potty break or to refill my glass of water I am overcome by the desire and weakness to eat my weight in biscotti.

I am so delirious from the thought of those little morsels being made and the aroma that I am not sure why I am writing this blog post, except maybe to let off some steam.

There is a fine line between thanking and slugging, loving and hating.  I thank my husband for making such sweet delights for us, for our friends and family; but I want to slug him for tempting me with them.

I love biscotti and the mélange of flavors that fill our home and my tummy but hate what they do to my body.

And that is the conundrum of life, isn’t it?  You can love something while hating it all at the same time.

I think I’ll go get some biscotti to help me sort it out.

Need a last minute Christmas gift?  There is still time to get your copy of Surviving Medical Mayhem – Laughing When It Hurts.  Order now at www.LorettaSchoen.com. 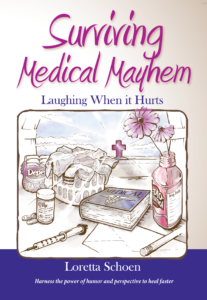