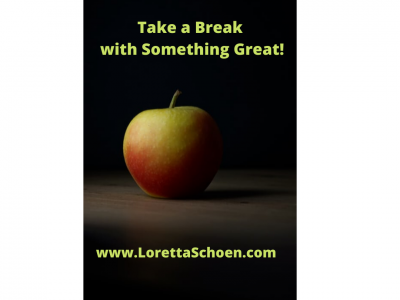 Take a Break with Something Great

The overeating of the holidays brings New Year Resolutions of strict fasting, cutting carbs and purposefully healthy eating.  But with the advent of the cold (or if you are from Florida like me, cooler) weather; strong temptations of warm gooey deserts flood our taste buds and the desire to bring back childhood memories is strong.  So I thought I would share a recipe that fits this desire yet is healthy and even good for you!

This recipe is taken directly from The Cancer-Fighting Kitchen by Rebecca Katz with Mat Edelson.

When I told my coauthor about this baked apple dish, he said it reminded him of an old folk recipe.  When he was little and had an upset tummy, his Russian grandmother would cut up an apple and leave it out on the counter for a few minutes, until it began to brown.  His grandmother would then affectionately say, “Come eat, taellahí” (“little man” in Yiddish).  Lo and behold, a few minutes later his stomach felt better.   He always figured it was love at work (and, of course, it was), but years later he found out there was also some science involved: As they brown – or cook, in this case – apples release pectin that naturally soothes the belly.  Baking makes the pectin and the rest of the apple easier to digest.  In this recipe, the apples are complemented by tasty morsels and spices – toasted pecans, dates, orange zest, and cinnamon – and as they bake, they smell heavenly.

Preheat the oven to 350 degrees.

Zest and juice of 1 orange

4 baking apples, such as Pink Lady, Pippin, or McIntosh

Combine the apples, dates, orange zest and juice, cinnamon, and salt in a small bowl and stir to combine.

Core the apples, leaving half an inch at the bottom, and peel the top edges.  Stuff the apples with the pecan filling, then dot the butter on top or melt the butter and brush it on the apple tops.

Put the apples in a baking pan, pour in about 1 inch of apple juice, and cover tightly with foil.  Bake for 40 – 60 minutes, until the apples are tender but not mushy.  Test for doneness by poking a fork into the apples; they should be tender and yield easily to pressure.

Serve warm, drizzled with the wam apple juice from the baking pan.

COOK’S NOTES:  If you don’t have dates or pecans, be creative!  You can substitute currants or raisins and walnuts or almonds, and if nuts are a problem, you can simply omit them.  You can use clarified butter if you like, or for a dairy-free version, use coconut oil.

Use a melon baller to scoop out the apple core; it’s important to keep the base intact.

STORAGE:  Store in an airtight container in the refrigerator for 3 days

LORETTA’S NOTE:  In my recipe, I used butter and brown sugar along with raisins because that is how my mother made them.  Today, this version is healthier.

“Take care of your body. It’s the only place you have to live.”  —Jim Rohn